McLaughlin, a Vermeer® Brand, was founded in 1921 and has proudly marked a century providing workable solutions for the construction, utility and trenchless industries. Today, the brand continues to innovate and expand the capabilities of auger boring equipment for customers worldwide. 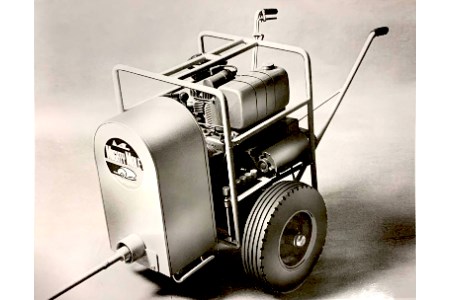 "Through much of the McLaughlin company's 100 year history, Vermeer and its network of dealers have been important partners," said Dave Gasmovic, Business Development Manager for Vermeer MV Solutions. "That mutual commitment solidified when Vermeer acquired McLaughlin. Since then, we’re proud to say that many of our original product lines have been incorporated into the Vermeer-branded product line-up”.

McLaughlin’s own roots go all the way back to the early part of the last century. After returning to the US from service in World War I, ex-coal miner Joseph McLaughlin had an idea for a product that would simplify a coal miner’s job and make the coal industry itself more productive. In 1921, in a rented space in Rockdale, Illinois, USA, he began production of his innovative improvements to the mining auger, and the company that would become McLaughlin Group, Inc. was born.

By the early 1950s, McLaughlin was a leading supplier of drilling tools to mines across the US and was ready to expand its operations, moving into a new facility in Joliet, Illinois. In the 1960s, the company once again expanded, building a new, state-of-the-art facility in Plainfield, Illinois.

Even though Joseph McLaughlin passed away in 1964, the company continued to follow his innovative spirit and commitment to offering equipment that solves real-world challenges. “Innovation is in McLaughlin’s DNA,” said Gasmovic. “And, it’s always been a guiding principle for the brand. For example, when, two large companies approached McLaughlin with a request to help solve the challenge of how to control the expense of residential underground utility installations, including the cost of surface restoration, McLaughlin was ready to respond.

Company leadership began working on a new type of system that would drill under roads, driveways and sidewalks to allow installation of small diameter services. The resulting product was called the Mighty Mole, and it set the stage for McLaughlin’s future success in the development and deployment of trenchless construction technology.

Continuing to grow its brand presence in the utility market, in 1970 McLaughlin bought Western Boring Equipment Company, an auger boring manufacturer. The purchase allowed McLaughlin to expand its business, and it gave them larger-diameter boring machines for an entirely new market.

This led to a decade of significant company growth and expansion. McLaughlin added plants in Greenville, S.C., and Arlington, Texas. The Texas facility began the redesign of their auger boring machines, particularly in regard to increases in thrust and horsepower.

When horizontal directional drilling began to take off in the late 1980s, McLaughlin saw the need for tracking and detection systems. The company brought to market the original Spot D Tek I. Development and improvements continued, and in the mid-1990s, the Verifier® G3 utility locator was introduced. “That same legacy lives on today in the form of the Vermeer Verifier G3 utility locator,” said Gasmovic.

In 1999, Vacuum Source, Inc. was founded as a subsidiary of McLaughlin serving customers with a new line of vacuum excavation and sewer cleaning systems. In 2001, Vacuum Source was made a division of McLaughlin, and the products took on the McLaughlin brand name. A major milestone was reached for these products in 2006 when McLaughlin began manufacturing them for Vermeer.

In 2012, Vermeer bought a minority interest in McLaughlin, selling McLaughlin’s vacuum excavators, utility locators, pneumatic piercing tools, core saws and auger boring equipment to contractors through the Vermeer dealer network. In 2017, after the synergies of the two companies were well-understood, Vermeer acquired the rest of McLaughlin. Then in 2018, Vermeer purchased Vac-Tron Equipment, LLC, and integrated the two companies’ product lines as Vermeer MV Solutions.

Vermeer MV Solutions continues to produce the McLaughlin auger boring products and has introduced important innovations, like the Workhorse 225 and Workhorse 175 auger boring machines, to the trenchless industry.

The company continues to offer additional innovations to underscore the brand’s commitment to continued progress. One example is the McLaughlin SRS (Steerable Rock System), the auger boring market’s first steerable head designed to navigate through solid and severely fractured rock. Another is the On-Target Steering system (OTS), designed to work with any auger boring system ranging from 16 - 60 in. in diameter. It is designed to install on-grade/on-line casings in one pass compared to the multiple passes required with pilot tube guided boring.

“We’ve done all this while increasing our manufacturing capacity, service and support capabilities,” said Gasmovic.

He finished: “Everything that McLaughlin has accomplished in the last 100 years has to provide innovative solutions to our customers’ problems. So, although we are proud of our century of service, we are focused on the future — always working toward the next development that will benefit the industry."

Read the article online at: https://www.worldpipelines.com/business-news/22122021/mclaughlin-achieves-100-years-of-equipment-innovation-and-service/