Nord Stream AG proudly lends its name to the fourth edition of the challenging international sailing competition across the Baltic Sea, which starts near Flensburg in the westernmost inlet of the Baltic Sea, on 20 September and ends in St Petersburg, Russia, between 23 - 26 September.

In its fourth year, the regatta has become a classic amongst the sailing community. In even years, the race features a stopover in a Baltic Sea port for match racing and start in Russia, ending in a German port. In odd years, the Nord Stream Race involves a series of match-races followed by a non-stop race across the Baltic Sea from Germany to Russia.

The pioneering spirit, international collaboration, and commitment to excellence of all the participating crews fits well with Nord Stream’s philosophy. As in previous years, Nord Stream is sponsoring one of the crews, Tim Kröger’s Team Europe, who will be sailing the ‘Spirit of Europe’ Swan-60 class yacht. Kröger will be heading a 13-strong crew of experienced sailors from several Baltic Sea countries.

Read the article online at: https://www.worldpipelines.com/business-news/21092015/nord-stream-race-2015-non-stop-across-the-baltic-sea/ 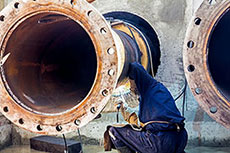