Cyberhawk, the world leader in visual asset management using drones and software, has marked a major business milestone this month as it celebrates its 10th anniversary. 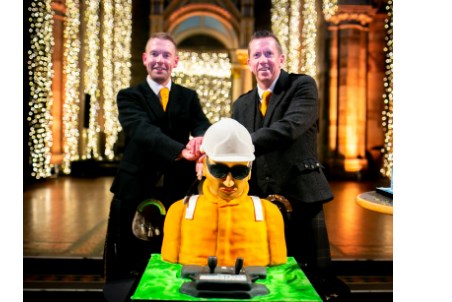 Founded in 2008 by former North Sea rope access engineer Malcolm Connolly, Cyberhawk has grown from two people examining the potential application of drones in industrial environments, to a 60 strong team operating in more than 30 countries for many of the world’s largest energy and infrastructure companies.

Cyberhawk was the first company to use drones for detailed engineering inspection and surveys in industrial environments, with the technology used for basic aerial photography until that point. Having completed more than 30 world firsts, Cyberhawk has proven that an industrial drone service business can be, and is, successful and profitable. Subsequently, the drone service industry has grown exponentially, with almost 5000 drone operators currently approved by the UK’s Civil Aviation Authority (CAA), and Cyberhawk holding license number 42.

In more recent years, Cyberhawk’s cloud based visual asset management software, iHawk, has been developed to stay ahead of the competition, providing industry focused solutions to store, manage and use the huge volumes of high-quality data captured by drones. iHawk solutions are focused on asset integrity and asset visualisation, allowing users in multiple industries to reduce site visits, gain a 100% visual record of their asset and quickly and easily access and understand its condition.

Headquartered in Livingston, Scotland, with bases in Houston and Aberdeen, Cyberhawk has completed more than 30 000 commercial flights in key industries including offshore oil and gas, petrochemicals and refining, wind and thermal power generation, electricity transmission and distribution, shipping, construction and civil infrastructure.

Highlights over the last decade include:

In 2018 the team announced its most profitable year to date, with a 34% increase in turnover to £4million. Key milestones this year include:

Malcolm Connolly, Cyberhawk Founder and Technical Director said: “The last 10 years have been a fantastic rollercoaster of a journey from the very early stages, when (most) people thought I was a lunatic trying to fly robots in high risk environments, to now, where the technology is flourishing and widely accepted throughout many industries.

“However, this is only just the beginning of the journey and I’m really excited about what we can accomplish in the next 10 years.”

Chris Fleming, Cyberhawk CEO added: “Having started life as a small drone inspection and survey company with a handful of clients, we are exceptionally proud to have grown into an industry leader which delivers innovative digital solutions to customers around the globe, every day.

“One of the biggest shifts we’ve seen in the last decade has been around using drone-captured data to create efficiencies and make more informed decisions. Our team was quick to identify this, which led to the development of our visual asset management software, iHawk. This platform has brought a fresh perspective to asset integrity and project management and it’s been really encouraging to see how widely it has been adopted by industry. We have many new developments in both our software solutions and inspection services to be announced shortly, so watch this space!”

Read the article online at: https://www.worldpipelines.com/business-news/20112018/cyberhawk-celebrates-a-decade-in-business/