A 27 year old from Dunfermline, Scotland, with ambitions to forge a new career in the energy industry has been named 2021 Apprentice of the Year by global energy safety and skills organisation, OPITO. 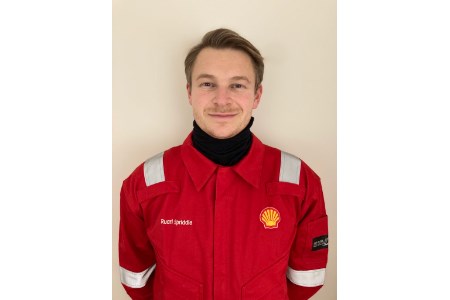 After attempting to gain experience in the sector as an offshore steward through self-funded training, Ruari Spriddle secured a coveted place in the Oil & Gas Technical Apprentice Programme (OGTAP) in 2019 and is currently in his third year as an instrumentation and control apprentice.

He is now set to continue his training at the Fife Natural Gas Liquids (NGL) plant, Mossmorran with his sponsor Shell UK.

OGTAP, which is managed by OPITO and the ECITB, is one of the UK’s largest industry-led apprenticeship initiatives and has brought around 2000 young people into the oil and gas industry since its inception in 1999. It has one of the highest achievement rates in the country and is currently sponsored by 19 oil and gas operators and major contractors.

“I’m hugely honoured to have won this award,” said Ruari. “I applied to the apprenticeship aware that I would likely be older than many in the cohort and knowing relatively little about engineering. I did, however, have determination and a willingness to learn, which I am delighted to see has paid off.”

The OGTAP programme focuses on four key disciplines: electrical maintenance; mechanical maintenance; process operations; and instrumentation and control, all of which provide the fundamental qualifications provided for technical roles in oil and gas, renewables, and associated sectors.

Apprentices attend an industry selected college for 21 months to gain required qualifications before spending two years with a sponsoring energy company. During this time they receive expert training and mentoring, gaining industry specific skills as well as an SVQ Level 7 in their chosen discipline.

Ruari continued: “I’ve always had a keen interest in engineering and how things work but I had never had exposure to the sector. Several people I know had previously been trained through the OGTAP scheme and had very positive experiences. I made the decision to apply after talking to a friend about his work as an instrument technician.

“The OGTAP apprenticeship provides a highly structured programme, with hands on training, which I don’t believe I could have received elsewhere. My next goal is to become a full-time instrument technician and this apprenticeship has allowed me to build a great foundation to develop my knowledge, skills and experience further and apply to roles across the energy industry.”

Shell UK Fife Plant Manager Craig Burnett said: “We are delighted that Ruari is being recognised for his apprenticeship at the plant. He’s a great role model for the programme, which gives people like him the opportunity to develop and contribute the skills needed in our industry to supply people with energy that powers their lives.”

The OPITO Apprentice of the Year Awards have been running since 2015. The best performing OPITO candidate is nominated by college tutors and OPITO mentors for the annual award before they are interviewed by a panel of judges to select the winner.

OPITO CEO, John McDonald, said: “This award is always a difficult decision for the panel to make, due to the dedication, ambition and motivation demonstrated by of all four of our finalists.

“These finalists have shown the characteristics that will be needed not only in the rapidly changing oil and gas industry, but also across the wider energy mix.

“Developing an energy workforce which is multi-skilled, flexible and adaptable is vital to meet our global low carbon commitments. We are committed to working alongside industry to continually review the OGTAP programme to ensure it remains fit for purpose in what is a rapidly changing energy landscape.”

The recent OGUK Awards also saw an OGTAP apprentice recognised with Sam Tinning from bp receiving the accolade for 2021.

Applications for the 2022 OGTAP programme will open early 2022.

Read the article online at: https://www.worldpipelines.com/business-news/17122021/opito-names-2021-apprentice-of-the-year/