Enbridge is resuming service after wildfire impacted 900 000 bpd of deliveries.

Enbridge Inc said late last week that it was steadily resuming service on its pipeline network through Canada’s energy heartland about a week after a massive wildfire spread through the Fort McMurray, Alberta, area, forcing a shutdown.

The shutdown included all pipelines in and out of Enbridge’s Cheecham terminal some 50 km (31 miles) south of the fire-ravaged city, affecting some 900 000 bpd of volume on its system.

Chief Executive Officer Al Monaco said operations had resumed at Cheecham and that the Woodland pipeline was ready to restart. The company was waiting to get access to conduct a fly-over inspection as fire crews were still working in the area.

Enbridge doesn’t expect the fires to affect its 2016 financial results or outlook, the company said while reporting a first-quarter profit.“Our preliminary estimate at this point is that it won’t have a material impact on our 2016 outlook,” Monaco said.

Read the article online at: https://www.worldpipelines.com/business-news/16052016/enbridge-resumes-pipe-service-following-fort-mcmurray-fire/ 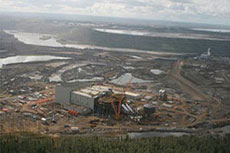 Ahead of next week’s election, Alberta’s royalty structure becomes centre of debate.