Corrosion is a global problem that costs the world US$2.5 trillion annually. This chemical process is most often seen on metal surfaces as rust and can result in catastrophic failure of infrastructure, such as bridges. 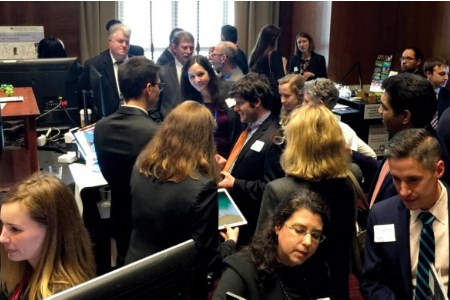 Researchers at the Aramco Research Centre-Boston have teamed up with scientists at the Centre for Integrated Nanotechnologies (CINT) at Sandia National Laboratories – one of the US’s leading national laboratories – to investigate the nanoscale mechanisms responsible for corrosion initiation and progression in steel.

Recently, this team’s work was brought to the attention of the US Senate’s Energy and Natural Resources Committee at a user science exhibition. Representing Aramco at the event were Michele Ostraat, Steven Hayden, Rachael Grudt, and Antonya Sanders. CINT representatives included scientist Katherine Jungjohann and CINT Director Andreas Roelofs.

“Each national lab selected their most successful and impactful user collaboration,” says Roelofs. “Aramco is a valued CINT collaborator, and their representatives have proven to be wonderful spokespeople for CINT and the Nanoscale Science Research Centre programme.”

Out of thousands of possible candidates, CINT and Aramco’s proposal was one of the 15 chosen for an interactive display at the exhibition due to the importance and impact this research could have on the world economy.

Senators have hands-on experience with corrosion

As part of the event, the team interacted with Senators and their staff members, using demonstrations and models to explain scientific investigations and important findings.

Sanders says the booth highlighted estimated corrosion costs in each Senator’s state and their effect on bridges there, including a percentage of them that are structurally compromised or functionally obsolete because of corrosion.

Visitors then interacted with a sifting sand demonstration that explained the difference between uniformed and localised corrosion.

The next step for the senators was to use a light board and puzzle together various graphical data sets that the team had 3D printed using in-house capabilities from the Boston centre.

The final technique allowed the Senators to observe the results of the team’s most recent advancement – flowing a liquid solution over a steel sample about the size of a bacterium inside an electron microscope and watching in real time as corrosion initiated at the nanoscale level.

“Our collaboration with CINT allows us to apply highly scientific, cutting-edge technologies to understand corrosion of real-world pipeline steel,” says Hayden. “We aren’t the first to use these technologies, but we are the first to look at these field relevant materials, and that’s what makes this work so exciting. Our recent observations have identified a weakest link in the steel structure, which has potentially huge repercussions for how steels are processed and for the advancement of the corrosion prediction models that are ubiquitous in industry.”

This research is still in its early stages. The next steps include looking at various coatings and processes in which steel can be made less susceptible to corrosion. As carbon steel is used all over the world, the impact of this research could be profound. Other industries that would be interested in this research and follow-on technology include steel manufacturing; utilities (electric, drinking water, sewage); construction of bridges, ships, and vehicles; hazardous waste; and world governments.

Read the article online at: https://www.worldpipelines.com/business-news/14062018/tackling-the-global-challenge-of-pipeline-corrosion/