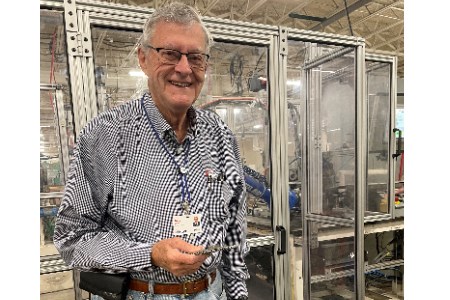 The award is the ISA’s highest distinction and honours outstanding individuals in the MROP channel for their long-standing service, as well as their contributions to supporting the success of the industrial supply industry. It also acknowledges an earned respect among peers and a passion for giving back and positively impacting the community and their company.

“My father’s commitment to the success of both Weiler Abrasives and the industry is admirable,” said Chris Weiler, president and CEO, Weiler Abrasives, and Karl’s son. “He’s always made it a priority to put customers, partners and employees first and to introduce abrasive solutions that can help solve challenges across the many markets we serve.”

After earning a degree in business from Hofstra University and completing active-duty service in the US Army, Weiler began working at the company in 1962 under his father, Karl E. Weiler, a Master Brushmaker from Germany. In 1971, he bought the company and became president. During his tenure in this position, which lasted until 1998, Weiler led strategic initiatives to focus on the industrial MROP channel and oversaw the steady growth of the company and the gain of leading market share. He also guided advancements in technology, integrating the production of abrasives into the original brush offering. Weiler has been widely recognised for his generosity and engagement in the local community.

“Karl’s story and the story of Weiler Abrasives is built into the history of the industrial MROP channel. His bold leadership, ability to innovate and dedication to his employees and community are why this award exists,” said Brendan Breen, president, ISA. “Karl Weiler sets the bar for all of us that seek to make a difference through a lifetime of achievement.”

Read the article online at: https://www.worldpipelines.com/business-news/13042022/karl-m-weiler-receives-lifetime-achievement-award-from-isa/