On 4 June the US Energy Information Administration (EIA) updated its Liquids Pipeline Projects Database, which includes a summary of more than 225 liquids pipeline projects in the United States and pipeline projects that cross into Mexico and Canada that are planned, under construction, on hold, or have been completed since 2010. 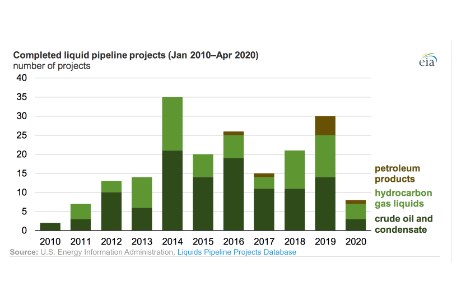 The pipelines included in the database carry crude oil, hydrocarbon gas liquids (HGL), and petroleum products. The database lists projects by categories, including new pipelines, expansions, and conversions from infrastructure that previously transported other liquids or natural gas./ EIA’s database also includes detailed information about the projects such as capacity, project start date, and location.

From January 2019 to April 2020, 15 projects carrying HGL were brought online. HGL pipeline project listings in the database include details on the types of products each pipeline carries, which can be one or more pure products (such as ethane or propane) or an unseparated mixture known as Y-grade. All HGL pipelines completed from January 2019 through April 2020 carry Y-grade, and most of these projects move the Y-grade from producing regions (primarily the Permian Basin in western Texas and eastern New Mexico) toward the Gulf Coast. At the destination, the unseparated Y-grade is fractionated—or refined—at a growing number of fractionation plants into pure products.

The purity products are either stored, consumed locally by refineries and chemical plants, distributed around the country, or exported. New projects bringing HGL to the Gulf Coast include the Grand Prix pipeline, the Shin Oak pipeline, and the EPIC pipeline.

Five pipeline projects that carry petroleum products were completed in 2019, and the Plantation Pipeline Roanoke expansion became operational in 2020. Petroleum products include gasoline, diesel, jet fuel, and other refinery products. Two projects that were finished in 2019, the Nuevo Laredo project and the expansion of the Burgos Pipeline, export refined products across the US-Mexico border into the Mexican state of Tamaulipas.

EIA updates its liquids pipeline database based on best available information from pipeline company websites; trade press reports; and government documents, such as US Department of State permits for border crossings. EIA releases updates to the liquids pipeline projects database twice each year, near the end of May and of November.

Read the article online at: https://www.worldpipelines.com/business-news/11062020/eias-liquids-pipeline-database-details-us-infrastructure-changes-in-10-years/