Recent announcements regarding financing for key onshore pipelines projects under construction provide a strong indication that the long term prospects for the market are positive, with the changing energy mix and increasing demand for gas providing stable drivers for pipeline construction. 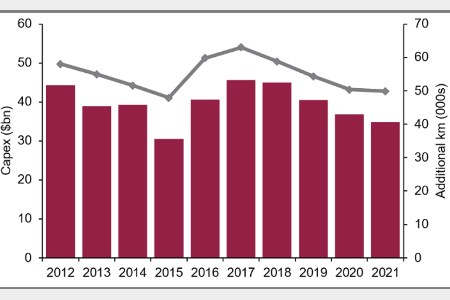 Notably, it was announced in December 2016 that the World Bank has approved loans totalling US$800 million for the construction of the Trans Anatolian Natural Gas Pipeline (TANAP), with Azerbaijan and Turkey being allocated US$400 million each for the project, which will transport gas from the Shaz Deniz 2 field in Azerbaijan to Europe. Moreover, in November 2016, Howard Energy Partners LLC (HEP) secured US$353.3 million in financing for the construction of the 302 km Nueva Era pipeline to transport gas from the Webb County Hub in Texas to Nuevo León in Mexico, with construction work on the pipeline having commenced in 2016. Both the TANAP and Nueva Era pipelines provide examples of the willingness of investors to support projects that will enable producers to access new markets and provide long term energy security, despite the downturn environment.

In the long term, Douglas-Westwood expects the move to enhance the use of natural gas in the energy mix of countries such as China and India to act as a key driver for pipeline installation. In some cases, this is likely to involve selecting between competing projects, with the focus being on cost saving. Notably, Russia and India signed a Memorandum of Understanding (MoU) in October 2016 to study the concept of a 6000 km pipeline to supply gas from Russia to India. However, recent reports indicate that the two countries are also considering an agreement to swap gas with China and Myanmar. This would involve Russia supplying China, China supplying Myanmar using reverse flow technology from an existing pipeline, and a new, less expensive pipeline being constructed from Myanmar to India.

Recent project developments also support Douglas-Westwood’s expectation of a short term increase in installation activity and capital expenditure in 2017. In December 2016 it was reported that the Turkish parliament has ratified the agreement with Russia for the construction of the TurkStream natural gas pipeline. This was followed in January 2017 with ratification by Russia’s State Duma, with construction work on the project scheduled to commence in 2017. Moreover, in January 2017, Gazprom indicated that it was planning to increase 2017 investments in the flagship Power of Siberia pipeline from US$1.3 billion to US$2.7 billion, with the aim of constructing over 600 km of the pipeline in 2017.

Despite the increase expected in installation activity in 2017, public opposition on environmental grounds, as well as security concerns, will continue to act as key obstacles to pipeline construction. Notably, the recent approval in by the Canadian government of Kinder Morgan’s Trans Mountain expansion project has raised concerns regarding Canada’s ability to meet its targets for reducing greenhouse emissions, as well as the impact on coastal ecosystems brought about by a subsequent increase in oil sands tanker traffic. In the US, construction of the final segment of the controversial Dakota Access Pipeline has also faced considerable delays due to opposition on environmental grounds.

Read the article online at: https://www.worldpipelines.com/business-news/09032017/long-term-prospects-for-the-onshore-pipeline-market-are-positive/