A total of 71 M&A deals with a combined value of US$38.7 billion were registered in the midstream oil and gas industry in 4Q18, according to GlobalData, a leading data and analytics company. 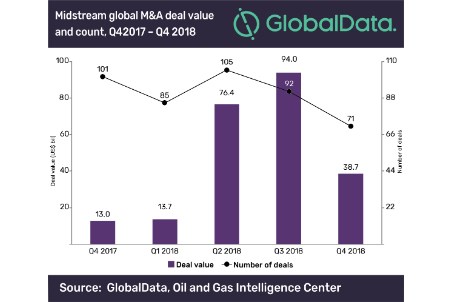 The company’s latest report: ‘Quarterly Midstream M& Deals Review – Q4 2018’ states that there were 24 midstream M&A deals (with values greater than US$100 million), together accounting for US$38.1 billion, compared with 28 deals worth US$93.3 billion in 3Q18, representing a decrease of 14% in the number of deals.

Praveen Karnati, Oil and Gas Analyst at GlobalData comments, “Americas remained the frontrunner for M&A registering 37 deals, with a total value of US$30 billion in 4Q18. Cross-border activity in the region increased from seven in 3Q18 to eight in 4Q18, while domestic acquisitions also increased from 28 deals in 3Q18 to 29 in 4Q18.”

Read the article online at: https://www.worldpipelines.com/business-news/07022019/midstream-ma-deals-declined-in-4q18/