The award is in recognition of his “outstanding, significant and unique achievements, and extensive contributions” to the offshore industry, and was presented at the annual OTC Dinner on 4th May 2014.

Carl Arne Carlsen’s career highlights coincide with major developments in the offshore industry, because he helped shape those developments:

The defining moment of his career came in 1980, as a direct consequence of the tragic accident of the semisubmersible drilling rig, “Alexander Kielland” that cost the lives of 123 workers in severe weather on the Norwegian shelf when it capsized after a column broke off due to fatigue failure of a bracing.

A few days after the accident, Carl Arne Carlsen was appointed head of classification for mobile offshore units (MOU) in DNV and requested to lead the work on developing a new set of MOU rules to cope with harsh environment in the North Sea. In co-operation with the Norwegian Maritime Directorate, the new rules were issued in 1981 introducing new industry principles for more robust design, construction and in-service inspection. They were almost immediately adopted throughout the industry, and provided important input to the IMO’s (the UN’s International Maritime Organization) 1989 MODU Code.

Ending a string of losses of oil tankers and bulkers?

After years of tragic and sudden accidents for oil tankers and bulk carriers, the International Association of Classification Societies, IACS, in 1992 set down a working group on enhanced surveys to come up with new requirements for in-service inspection of these ship types.

Led by Carl Arne Carlsen the group developed the Enhanced Survey Program. Nine months later it was made mandatory by IMO for all oil tankers and bulk carriers worldwide and key aspects are today also applied by DNV GL for mobile offshore units.

”During my work to develop new rules and standards for the offshore industry I have learnt that it is often not the technical challenges that pose the biggest hurdles. The most difficult part is to find cost effective practical solutions that can gain acceptance among the various stakeholders in the industry and by the regulatory authorities,” Carl Arne Carlsen comments.

In his experience, the way to succeed is ‘to be determined to strike the right balance between theory and practice, safety and cost efficiency through respectful involvement of all stakeholders. And you have to work together with really smart and principled people!”

Introducing FPSOs for safe and cost efficient operations in the North Sea?

In the early 1980s, ships were becoming popular as floating oil production and storage platforms (FPSO) in benign areas. But introducing FPSOs to the North Sea, which eventually proved to be an important enabling factor to start production on many new fields during, was tough at the time:”The accident statistics for ordinary oil tankers did not meet the required regulatory level for oil production, and qualifying the ship analysis methods was an uphill struggle. It took several years to get industry consensus on how to handle these issues. Yet it was clear that with sound risk management FPSOs could enable production on new fields at a time of low activity in the North Sea,” he says.

The turning point came when Petrojarl 1 started operation on the Norwegian continental shelf in 1986, after very active involvement of Carl Arne Carlsen. This unit was a reference case for the FPSO boom in the North Sea in the 1990s and has today operated on 10 different fields in Norway and UK. It is still active.

In the late 1970s jack-up platforms were being used offshore, in increasingly deep waters. Based on extensive measurements through an industry project in the harsh environment on the Norwegian Ekofisk field, it became apparent that the dynamic deflections of the platforms had to be incorporated in the design work.

The current industry standards ignored this effect, and the initial reaction by the industry was somewhat reluctant to add the dynamic, as jack-ups were mostly used in shallow waters. But building on these fullscale measurements Carl Arne Carlsen and his colleagues developed analysis methods to implement these dynamic effects in the DNV MOU rules in 1982. With support from the Society of Naval Architects and Marine Engineers (SNAME) these aspects are today part of the industry standard for safe operations.

”Carl Arne Carlsen is a thought leader in the offshore industry. We are proud that he has spent his career with DNV, now DNV GL, and on behalf of all his 16 000 colleagues I congratulate him with this recognition. Throughout his 40 years in DNV, Carl Arne Carlsen has had almost every possible position in the company. He has been a member of the executive committee, he has been a regional manager, a global network leader, head of R&D, plus a whole range of other positions. Through all this work, he has significantly helped DNV GL fulfil its purpose of safeguarding life, property and the environment,” says Henrik O. Madsen, DNV GL Group’s CEO.

Read the article online at: https://www.worldpipelines.com/business-news/06052014/otc_recognises_dnv_gl_s_dr_carl_arne_carlsen/

The popularity of engineering as a career is soaring, according to data from Randstad, the specialist engineering recruiter. 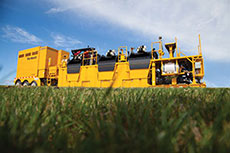 Vermeer introduces new reclaimer for work in oil and gas fields, which meets the standards for areas where methane, ethylene and similar gases are present. 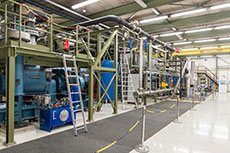