The keel laying ceremony for Subsea 7’s new reel-lay vessel took place at Royal IHC in Krimpen aan den IJssel (Netherlands) today, 5 July. In line with this major milestone Subsea 7 announced the vessel will be named Seven Vega, which is the winning suggestion of an employee vessel naming competition. 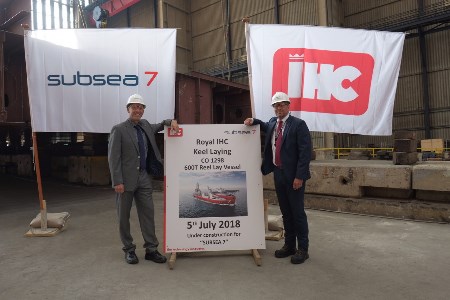 Stuart Fitzgerald, Executive Vice President Strategy and Commercial Subsea 7 said: “The vessel marks an important investment for the future. When delivered, Seven Vega will be one of the most capable and cost-effective reel-lay vessels in the market and a global enabler for Subsea 7. It has been designed to deliver economical technologies that address the growing market trend towards longer tie-back developments. The vessel’s cutting-edge pipelay system focuses on crew safety, operational efficiency and flexibility. This system will be capable of installing complex rigid flowlines including pipe-in-pipe systems and electrically heat traced flowlines in water depths up to 3000 m.

“It was important to us to involve our employees in the journey of our new build vessel. The naming competition generated an incredible 1700 entries. We chose Seven Vega because Vega is one of the brightest stars in the northern sky and will become the North Star in the future. We look forward to welcoming the winner of the competition to the naming ceremony and to Seven Vega joining the fleet in the first half of 2020.”

Dave Vander Heyde, CEO Royal IHC said: “We are proud to have reached this important milestone for the fully integrated reel-lay vessel. We think the name suits this prestigious vessel and are looking forward to progressing the building process and seeing Seven Vega taking shape on the slipway.”

Read the article online at: https://www.worldpipelines.com/business-news/05072018/subsea-7-celebrates-build-milestone-and-announces-vessel-name/