The EIA reports that: the Enbridge Line 3 replacement pipeline, which delivers crude oil from Edmonton, Alberta, in Canada to Superior, Wisconsin, became fully operational on 1 October 2021, increasing the pipeline’s capacity to 760 000 bpd. Before the replacement, Enbridge Line 3 had a capacity of about half that amount. Because the Line 3 replacement project increases the capacity to import crude oil by pipeline from Canada, this pipeline could reduce the need to ship crude oil from Canada by other modes, especially rail. 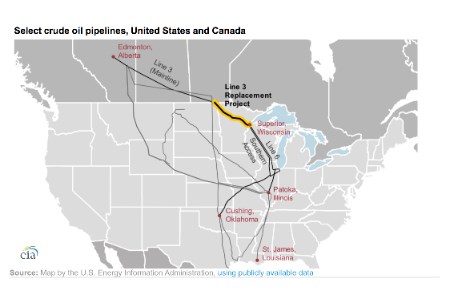 In late 2018 and early 2019, as much as 10% of Canada’s monthly crude oil exports to the US arrived by rail. The portion of crude oil shipped by rail tends to increase when the price difference widens between crude oil in Canada and the US.

So far this year, WCS has been priced between US$10/bbl and US$18/bbl less than WTI. Although the price difference between these two crude oil types is affected by several factors, including refinery maintenance and crude oil inventory levels, the longer-term price difference could narrow because of the increased pipeline capacity.

Read the article online at: https://www.worldpipelines.com/business-news/04112021/eia-added-transnational-oil-pipeline-capacity-could-reduce-crude-oil-shipped-by-rail/