The inherent versatility of gas infrastructure – particularly its ability to be converted to carry low-carbon fuels in the future – creates an opportunity for gas to be a ‘second pillar of decarbonisation’ over the long-term, according to a new study by IHS Markit. 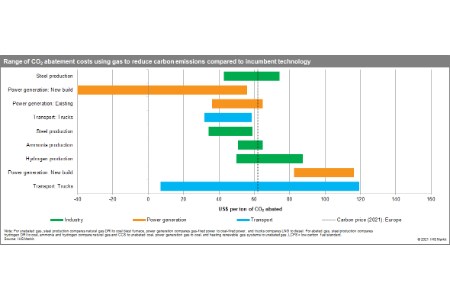 Entitled A Sustainable Flame: The Role of Gas in Net Zero, the new study says that natural gas can play a critical role both in early action on emissions reductions and also acting as a pre-build to greater decarbonisation given the potential for the infrastructure to carry low-carbon gases – such as ammonia, hydrogen, synthetic methane and renewable natural gas – in the future.

Specifically, the study finds that these low-carbon gas applications could be viable with a carbon price between US$40 - 60/t, close to levels already found in some markets today.

“The versatility of natural gas infrastructure presents an opportunity to seize the low-hanging fruit of emissions reduction in the near-term while also making a down payment for deeper decarbonisation,” said Michael Stoppard, Chief Strategist, global gas, IHS Markit. “Switching to natural gas can support vital early action by replacing coal and oil and their associated high-er emissions while also acting as a pre-build of energy carriers for a low-carbon future.”

Replacing older and less efficient power plants with best-in-class natural gas generation reduces emissions by 50% per unit of electricity. The IHS Markit study finds that increasing natural gas use in power generation in Asia to displace coal could cut emissions by around 1 Gt – around 3% of all GHG emissions from the energy sector. This would require an increase in global gas production of about 15% from today’s level.

While substituting natural gas for higher-emitting fuels has an immediate and discernible impact on GHG emissions, some express concern that these investments may embed or lock in future emissions for several decades. However, the study finds that these ‘lock-in’ concerns need not be the case because the infrastructure can be repurposed:

“Repurposing infrastructure has technical challenges but the costs, while significant, are still lower than building entirely new facilities,” said Shankari Srinivasan, Vice President, global and renewable gas, IHS Markit. “And it provides flexibility to policymakers and lenders who could structure authorisations and loans such that any new-build infrastructure be conversion-ready and have defined performance standards with limits on the life that the asset can operate before being converted.”

Investors could then decide whether to risk the investment on the basis of later conversion, or to run the economics on shorter asset life assumptions, the study says.

The underlying versatility of the infrastructure is important because gas will continue to be a vital component of the energy mix up to and through the transition to low-carbon gases, the study says.

For example, electricity delivered by wire is less well suited for meeting the need to produce heat, either for industrial processes or for heating buildings, the study notes. The IHS Markit case study of New York – whose current power system is sized at 31 GW – would require a system sized to over 150 GW for the full electrification of heating (and even with the full deployment of air-sourced heat pumps, the system would need to be 133 GW).

“Renewable capacity will continue to grow, electrification will broaden its reach and improvements in battery storage will make a decarbonised grid more reliable,” said Stoppard. “But the transition to a low-carbon gas supply will also be needed to serve the sectors beyond the reach of electrification and wires.”

Image: Gas can be used in a variety of sectors to reduce carbon emission intensity. Costs vary widely but many of the proposed uses could be economically viable within the range of US$40 - 60 /t of carbon. Using natural gas in power generation instead of coal reduces emissions sometimes at negative costs.

Read the article online at: https://www.worldpipelines.com/business-news/04082021/ihs-markit-conversion-of-natural-gas-pipelines-will-support-emissions-goals/

2022 will be a banner year for the flowmeter markets, suggests Jesse Yoder, PhD, Flow Research, USA.