Property taxes paid to counties and municipalities by the proposed Atlantic Coast Pipeline would ultimately exceed US$25 million a year, according to estimates provided to the local governments.

The estimates were developed by Dominion, which will build and operate the natural gas pipeline pending regulatory approval for a four-member joint venture that includes Duke Energy, Piedmont Natural Gas and AGL Resources. The pipeline is to extend approximately 550 miles in West Virginia, Virginia and North Carolina to bring much-needed natural gas for power generation, homes and businesses.

"The local benefits of the Atlantic Coast Pipeline for the host communities – including new property taxes paid by the pipeline - will be very real and very significant," said Diane Leopold, President of Dominion Energy. "At a time when many local governments are challenged to fund schools and provide other essential services, this new revenue can make a big difference."

Annual property tax payments will increase during the construction period, based on tax formulas in each state and locality. For example, Dominion has estimated that counties and municipalities along the proposed route would receive US$23 million in property tax payments in 2020 and increase to more than US$25 million starting in 2021, when the full value of the project is ultimately reflected in tax payments.

The property tax estimates are based on the latest available tax rates and assessment ratios by each county and are subject to change. They exclude any property taxes on land, and are calculated using current estimates of income, expense and capital costs. Changes in the construction schedules for the pipeline also may affect the amount and distribution of the property tax payments in any given year.

"These property tax benefits are in addition to the cleaner air, the thousands of jobs it takes to build a project of this magnitude and the other significant economic growth created by the pipeline," Leopold said.

Chmura Economics & Analytics of Richmond, Va., projects that the Atlantic Coast Pipeline would inject an annual average of US$456.3 million into the economy of the three-state region of West Virginia, Virginia and North Carolina, supporting about 2900 annual jobs in the region from 2014 - 2019. When the pipeline is in full operation, the project is estimated to have an annual impact in the three-state region of US$69.2 million that can support 271 regional jobs from 2019 onward.

Read the article online at: https://www.worldpipelines.com/business-news/02122014/atlantic-coast-pipeline-tax-payments-to-top-us25-million-a-year/ 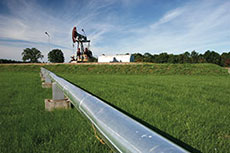 FERC can find no reason why the Constitution pipeline will lower house prices along the route in northeastern US states. 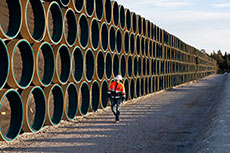