Enbridge Inc. has confirmed the return to service of the northern segment of the Athabasca Pipeline (Line 19) between Fort McMurray and Cheecham on 30th June. Enbridge continues to make progress in responding to the June 22nd release from its Line 37 pipeline; the failure of Line 37 has been confirmed to have been caused by a 1-in-100 year rainfall event last week which triggered ground movement on the right-of-way.

Enbridge had shut down pipelines that shared a corridor with Line 37 as a precaution. The Athabasca Pipeline was restarted early 30th June at reduced operating pressure following completion of extensive engineering and geotechnical analysis, as well as excavation and inspection at several points on the pipeline. Similar analysis has been completed on the Wood Buffalo Pipeline (Line 75), which runs between Fort McMurray and Cheecham, and Enbridge anticipates returning this line to service shortly. The Woodland Pipeline (Line 49) between Fort McMurray and Cheecham has been in the process of line fill upstream from the site of the incident. Line fill activities continue in preparation for full start up.

Enbridge is continuing further geotechnical analysis at the site. Once this analysis is complete, Enbridge will identify and implement any necessary mitigation measures to protect against further ground movement. Enbridge anticipates returning the Athabasca and Wood Buffalo pipelines to full pressure and capacity. Timing for completion cannot yet be determined; however, further loss of revenue is expected to be minor in the interim.

"The unprecedented rainfall and extremely wet conditions at the site have had a significant impact on the ability of crews and heavy equipment to safely access the site of the release, complete excavations and conduct visual inspections. While our focus was on bringing all possible human and equipment resources to bear in responding as quickly as possible, we committed from the outset that we would not compromise safety, nor restart our pipelines until we could ensure that it would be safe to do so," said Stephen J. Wuori, President, Liquids Pipelines and Major Projects.

"We have been in constant communication with our customers to provide updates of our progress and to work with them to mitigate impacts to their operations. We have maintained regular contact with the Alberta Energy Regulator as well as members of nearby communities including Aboriginal communities."

Recovery of oil from the release on Line 37 continues with improved weather conditions aiding efforts. Environmental regulators have been to the site and Enbridge is providing regular updates on methodology and status of the clean-up and remediation. Repairs to Line 37, which serves the Long Lake oilsands project, are continuing. However, completion of repairs and return to service will be contingent on completion of further geotechnical analysis. Limited volumes that would have otherwise been transported to Cheecham on Line 37 are being received via truck.

Read the article online at: https://www.worldpipelines.com/business-news/02072013/enbridge_restarts_athabasca_oil_pipeline_368/ 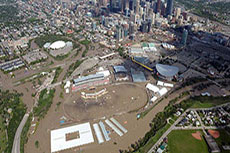 Enbridge oilsands pipeline spill may have been caused by heavy rains and flooding; Athabasca and Waupisoo pipelines shut as a precaution 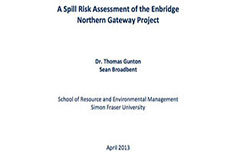 A new report has concluded that the proposed Northern Gateway pipeline has a 98.5% risk of a significant spill in the pipeline’s first 50 years of operation.

Canada has a wealth of new and existing deposits of oil and gas clamouring for pipeline capacity to market. The challenge, says Gordon Cope, is building it.