In Europe, Equinor ASA, Gaz-System SA, and Snam S.p.A. are the top three spenders among all oil and gas companies on new build capital expenditure (capex) for planned and announced projects across the oil and gas value chain by 2025, according to GlobalData, a leading data and analytics company. 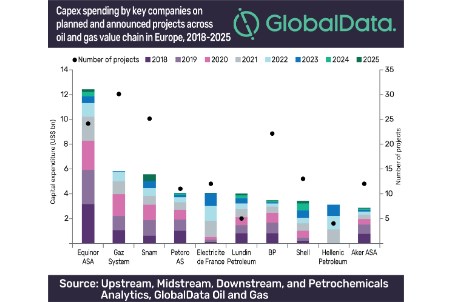 GlobalData’s latest report, ‘Top Oil and Gas Companies Planned Projects and Capital Expenditure Outlook in Europe – Equinor Leads Capital Spending Across Oil and Gas Value Chain’, reveals that Equinor ASA tops the companies European spend list with an estimated capex of US$12.4 billion expected to be spent on 24 projects. Gaz-System SA and Snam S.p.A. are the second and third biggest investors with US$5.8 billion (30 projects) and US$5.6 billion (25 projects), respectively. With Petoro AS in fourth position with US$3.8 billion (seven projects) and Lundin Petroleum in fifth with US$3.7 billion (3 projects).

Soorya Tejomoortula, Oil & Gas Analyst at GlobalData, comments, “Whilst Equinor ASA leads in planned and announced projects, Falcione Energia S.R.L is the number one capex investor in European new build regasification, with an estimated  US$0.7 billion spend on the upcoming Eagle Floating regasification terminal in Albania.”

In the upstream sector, Equinor ASA has the highest new build capex commitment of US$11.9 billion (21 projects) between 2018 and 2025.

Gaz-System SA will be the major spender in midstream sector, primarily focusing on oil and gas pipelines with a capex spend of US$5.1 billion to bring 29 planned and announced projects online by 2025.

In terms of liquid storage, H.E.S. International BV is in the forefront with capex of US$0.7 billion expected to be spent on an upcoming liquids storage terminal, Maasvlakte, in the Netherlands.

Read the article online at: https://www.worldpipelines.com/business-news/01112018/equinor-asa-tops-european-projects-investment-list/