Phillips 66 has announced 4Q15 earnings of US$650 million, compared with earnings of US$1578 million in the 3Q15. Adjusted earnings, excluding special items of US$60 million, were US$710 million.

“We operated well in the quarter, as refining capacity utilisation remained high and clean product yield increased," said Greg Garland, Chairman and CEO. "We also reached a significant milestone with the Sweeny Fractionator One and Clemens Caverns coming online. Solid execution in the fourth quarter generated US$1.5 billion of cash from operations, and we returned over US$700 million to shareholders through dividends and share repurchases."

"Our financial performance in 2015 demonstrates the resiliency of our diversified portfolio in a low commodity price environment. We create value by focusing on operating excellence, enhancing Refining returns, and delivering on our Midstream and Chemicals growth programmes. Our balance sheet is strong, and we maintain a disciplined approach to capital allocation. We remain firmly focused on these core priorities in 2016."

Phillips 66’s Transportation business generated adjusted earnings of US$78 million during 4Q15, consistent with 3Q15. NGL adjusted losses were US$2 million for 4Q15. The US$34 million decrease from the prior quarter was largely driven by the timing of adjustments related to the tax extenders bill, signed in December, as well as additional costs associated with the Sweeny Hub.

Phillips 66 Partners (PSXP) contributed US$37 million to the Midstream segment's 4Q15 earnings. PSXP's limited partner distribution increased to US$0.458 per unit, a 7% increase from 3Q15. Distributions to Phillips 66 from PSXP increased 14% in 4Q15, compared with the prior quarter, reflecting the impact of incentive distribution rights.

During 4Q15, DCP Midstream recognised asset impairments primarily as a result of the continuing low commodity price environment. The impairments negatively impacted earnings from Phillips 66’s equity investment in DCP Midstream by US$104 million after tax, and were excluded from adjusted earnings.

During 4Q15, CPChem's Olefins and Polyolefins business contributed US$181 million to Phillips 66's Chemicals earnings. This was a decrease of US$80 million compared with the prior quarter largely due to reduced margins, as well as decreased equity earnings. Turnaround and maintenance activity in 4Q15 increased operating costs and decreased global utilisation for O&P to 92% compared with 94% in 3Q15.

CPChem's Specialties, Aromatics and Styrenics business contributed US$9 million of adjusted earnings in 4Q15, a decrease of US$8 million from the prior quarter primarily due to lower earnings at CPChem's SA&S equity affiliates as a result of planned turnarounds and lower margins.Chemicals earnings for 4Q15 were positively impacted by a US$34 million tax adjustment. This item was excluded from adjusted earnings.

The decrease in earnings was largely driven by lower realised margins due to a 35% decline in global market cracks compared to 3Q15. 4Q15 gasoline market cracks dropped to US$12.72/bbl, compared with US$21.44/bbl during 3Q15, while distillate cracks declined from US$15.67/bbl to US$12.86/bbl for the same period.

Market capture increased to 74%, compared with 72% in the prior quarter. Phillips 66's refining utilisation and worldwide clean product yield were 94% and 85%, respectively, in 4Q15. Turnaround costs for 4Q15 were US$130 million pre-tax, primarily relating to the Western/Pacific Region.

Refining's earnings in 4Q15 were impacted by certain tax impacts, including a US$91 million benefit resulting from a change in German tax law. Additionally, the WRB joint venture recognised a lower of cost or market inventory adjustment resulting from declining commodity prices, which negatively impacted earnings from Phillips 66’s equity investment in WRB Refining LP by US$33 million after tax. These items were excluded from adjusted earnings.

The company continues to execute on its plan to grow the Midstream and Chemicals businesses, while maintaining commitments to shareholder distributions, financial flexibility and a strong balance sheet. Midstream growth is fuelled in part by robust operating cash flows generated by the company’s Refining and M&S operations. In addition, PSXP provides a cost efficient vehicle to fund that growth and invest in fee-based infrastructure, as demonstrated by the US$1.5 billion raised by PSXP in debt and equity offerings in 1Q15.

The company continued development of the Sweeny Hub with the 100 000 bpd Sweeny Fractionator One and Clemens Caverns projects, which came online in 4Q15. Construction of the 150 000 bpd Freeport LPG Export Terminal is on schedule and on budget with startup expected in the second half of 2016.

In 4Q15, Phillips 66 Partners acquired Phillips 66's interest in the Bayou Bridge Pipeline joint venture. The joint venture was created to develop a pipeline from the Phillips 66 and Sunoco Logistics terminals in Nederland, Texas, to St James, Louisiana. Construction is underway on the first segment of the pipeline, which will deliver crude oil from Nederland to Lake Charles, Louisiana. Commercial operations on this segment are expected to begin by the end of 1Q16.

In Chemicals, overall progress on CPChem's world scale US Gulf Coast Petrochemicals Project is now approaching 70% completion, with startup expected in mid-2017. This project consists of an ethane cracker and related polyethylene facilities that will increase CPChem's US ethylene and polyethylene capacity by more than 40%.

All planned maintenance works on the gas pipelines have been completed on time.

Phillips 66 has announced a US$2.0 billion increase to the company’s share repurchase programme.

Phillips 66 and Energy Transfer Partners have announced the launch of a binding open season to assess interest in a new crude oil pipeline. 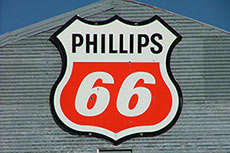